Moles can drive you nuts! If you’re like most homeowners, you’re probably confused by all of the conflicting “advice” on mole control. You believe every rumor, home remedy or control method is worth trying. In fact, chemicals and home remedies (including castor oil derivatives like Mole Med and grub controls) are not only ineffective when dealing with moles, they allow the animals time to establish and become real problems. Moles are woodland animals in nature, but can quickly colonize and spread through adjacent residential properties if not handled properly. Since they need a well-established tunnel network to survive, the longer they’re allowed to tunnel, the more habituated they become and difficult to control. Trapping is the only effective method of control. It is literally a war of attrition.

Since few homeowners bother to trap moles, large mole populations can develop in residential areas. It seems odd to me that in spite of all knowledgeable sources advocating trapping as the only reliable approach to a mole problem, we’re still pouring on the chemicals, pumping the soil full of gases, snapping up sonic noise makers and trying age old home remedies that never have worked.

The common mole is an insectivore, not a rodent. Its diet is restricted to ground invertebrates such as grubs, millipedes, ants and the like. However, the mole’s primary food source is earthworm, so trying to control white grub and lawn insects is no protection from mole activity. The activity in certain lawns can simply come and go throughout the season. On large properties the activity may gypsy from one part of the lawn to another. This movement or migrating is controlled by climate and ground moisture. Moles will adapt to changes in food supply and source as different insects become available in different places and at different times throughout the year. Moles will jump homerange and readily recolonize other existing or deserted tunnels. Moles may leave an area if disturbed but will usually return when you least expect it. Even without disturbance mole activity may last only a week or two in a particular area. This here-now gone-tomorrow behavior is probably the root of most of the subjective misconceptions that make some home remedies including moleicides appear credible. Test results using chemicals as a control can also be distorted. Two that come to mind were both done in part by the same entomologist at the University of Michigan. He considers some poison baits (chlorophacinone) and Mole-Med to be effective in controlling moles. 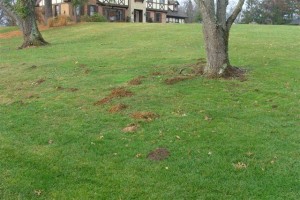 Moles are problems in residential properties because of:

There are no chemical solutions to a mole problem and trapping is the most reliable method of control. Mechanical traps are environmentally friendly, target specific and they work! Some traps are good, some are not. I prefer the Victor spear type and the Victor scissors (Out-o-sight). See news on new scissor trap.

One of the best studies I ever read on moles was published in Manhatten, Kansas in 1910 by Zoologist T.E. Scheffer. At the end of his work, he stated “Trapping is the surest and, so far as my experience goes, the most practical method of getting rid of moles.”

Eighty years have passed and knowledgeable advice on moles remains the same. When moles are a problem, TRAP!

TRAPPING & TRAPS
Having used different traps over the years I consider the Victor spear trap and the Victor Out-O-Sight trap the only two traps worth using. The spear works best on new surface tunneling when the digging is visible as surface runs (usually in the early spring or early autumn). The spear also works well when the ground is wet after rains. The Out-O-Sight is a deep tunnel trap.

Deciding where and how to set mole traps is generally a problem for the homeowner. Box instructions are general and difficult to understand. Some basic biology and behavioral information is a plus. Hands-on help seems to work best but trial and error and a lot of persistence can also produce good results. Permanent or deeper tunnels will be the most productive since these tunnels may be used several times daily by the moles. To identify main runways in a yard or area, look for constantly reopened tunnels which follow more or less a straight course for some distance or that appear to connect two mounds or two feeding areas. Main runways will follow fence rows, walkways, foundations, or other man made borders. Main runways will occasionally work along woody perimeters of a field or lawn. Rambling tunnels in the lawn are probes of a sort and are quickly constructed by moles at about 15 to 18 feet per hour. They may or may not be reused. See Biology- Tunnels & Behavior.

You can trap moles anytime of the year, but I’ve found that early fall and early spring are the most effective times. Populations are normally lower, and damage is most visible then, before lawn grasses grow too tall in the spring or are covered with leaves in the fall. Early fall trapping eliminates moles before they move deeper for the winter and begin to reopen old tunnels and throwing up new mounds. 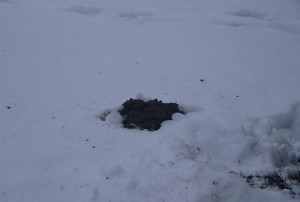 Trapping in early spring, before new litters are born, prevents a lot of trouble later. Moles may seem to vanish during extended cold or dry periods, but they’ve just gone deeper. And because they’re using fewer tunnels during these adverse conditions, trapping can be very effective, though difficult.

Mole traps work because moles usually try to reopen a blocked tunnel. The trapper obstructs the tunnel and sets the trap trigger against the obstruction. As the mole clears the tunnel, it pushes up on the trigger pan, releasing the spring and is skewered or crushed by the trap.

Scissors Trap In A Deep Tunnel
The scissors or Out-Of-Sight trap allows you to dig into an active tunnel to place the trap exactly in the moles path.

The Victor 0645 Plunger Mole Trap is in the process of being modified. The setting principle is the same as for the Classic Plunger type illustrated in the image to the right, however, the box instructions and illustrations are deceiving. The front panel shows a set trap with mole going through the trap with the tunnel not blocked. The trigger pan must rest on a small blockage made by crushing a small section of the tunnel as explained in 1) above Harpoon In Shallow Tunnel. The front panel also details a 28 coil spring. The new trap actually has 13 coils. The side panel also shows the “new” 0645 set incorrectly. See fig 3.

If the plunger trap is set as the picture illustrates, the mole will not be able to set the trap off. The tunnel portion beneath the trigger pan must be partially blocked, and trigger pan must rest on the blockage. All mole traps are designed to discharge when the moles pushes up on the trigger. The moles does this by trying to squeeze beneath the blocked portion of the tunnel. This portion should be directly below the trigger pan.

I don’t think the new plunger is constructed as well as the old spear trap but I am able to catch moles with the new 0645. As I stated above, it is in the process of modification and I am sure the kinks will be soon be worked out.

Any comments on the “new” Victor 0645 plunger can be directed to Clay Tully
Woodstream Corp.
69 N. Locust Street
Lititz, PA 17543

Both Victor traps work fairly well with the starnosed mole. It can be a problem to trap because of its small size and strength but particularly because of the soil(loose and moist) that it inhabits.. I have mentioned that moles will always take the path of least resistance when tunneling. Since either Victor trap requires tunnel blockage to trigger, starnose tend to tunnel beneath or around the blockages which are usually firmer than the surrounding marshy sand. This can be remedied by placing a floor beneath the trigger to keep the starnose from digging down. A small piece of wood (such as a short length of paint stick) or wire mesh will work. The floor should be short enough to allow the jaws of the out-o-sight trap to close on both sides. The wire mesh may work better for the Victor spear trap.

COMMON MISTAKES
One of the most common mistakes made with the spear trap is that the trigger pan is left above the tunnel allowing the mole room to squeeze beneath the trap. All traps are designed to spring as a result of some form of tunnel blockage. The only real mistake moles make is that they are constantly reopening blocked or crushed tunnels. The trigger pan sets in a depression or small blockage in the tunnel. Traps don’t go at the ends on tunnels!

Another common mistake is that traps are placed on the wrong tunnels. All manufacturers instructions state that traps are to be placed on active tunnels. Finding an active tunnel is simple enough. On a long surface run you can crush a small section completely with your heel. You don’t want to crush the entire tunnel because this might cause deeper tunneling. A section several inches wide will suffice. Deeper tunnels have to be opened with a tool or shovel. Open only a six to eight inch section. I use a four pronged cultivator with the handle cut off for ease of handling. The deep tunnel must be a through tunnel crossing from one side to the next. A single opening tunnel (usually beneath a mole mound) is just a hole. The only thing coming out of a hole is likely to be dirt. We don’t trap holes! Fill in the deep tunnel with soil. In either case the blockages will be reopened within 24 to 48 hours if active; within several hours if very active. When tunneling is widespread this method will help you qualify only the active tunnels keeping the number of traps needed to a minimum.

You trap tunnels only! A very common mistake made by real novices is to shove a spear trap into a mole mound. No good! Even if the mole adds to the mound and sets the trap off you just catch dirt. Another mistake made by homeowners who do get the spear trap in correctly is that when it is set off by a mole, they pull the trap out and are disappointed with no mole. Even a dead mole will not come out like a shis-ka-bob. Before pulling a discharged spear trap, dig on both sides of the spears to see if there is a deceased mole beneath the spikes. Many a homeowner has trapped a mole and not realized it.

A common mistake is not to use enough traps. If you have three active tunnels in the yard, use three traps. Traps are usually cheaper in the long run than most ineffective mole chemicals, poisons or noisy contraptions.

When you’re dealing with moles keep the grass short and well manicured. This will make spotting new mole tunnels a lot easier. Putting sod or top soil over mole tunnels can be a big mistake. It will add another dimension to the tunnel system and make spotting tunnels impossible. A great way to spot new mole activity and tunnels is to walk the lawn with the sun in your face. Mole tunnels will usually cast a distinct shadow through the lawn. They will also show up better if you look the day after the grass has been mowed. You might even get lucky and catch a mole working or adding on to a new tunnel. (The new tunnel will stick up higher than the surrounding cut grass.) If you choose to dig the mole out, be careful! They have sharp teeth and can bite!